The Lord continues to be so gracious giving many encouraging opportunities of making the gospel known, and for His providential care.  The safari to west Kenya was during a time of much rain; in fact the whole country is receiving the sort of rain we have not had for years.  Yet I only got stuck in the mud once, as it did not rain at the crucial times of our travelling.

West Kenya
(1) I had 6-15 in attendance at the various meetings where the word was brought:
A Bible study on Salvation from Ephesians 2:1-10 in the home of William Keter, a pastor with Glory Baptist Church, Chebang’ang’.
Two sessions with church leaders on Justification & Sanctification from Romans 3-6, in the Glory Baptist Church premises with the other pastor, David Ng’etich, leading.
A Bible study on Christian maturity and leadership from 1 Timothy 3:1-7 at Upendo RBC.
Two sessions with pastors in the South Nyanza region on Self-Examination from 2 Corinthians 13:5, and preaching the unsearchable riches of Christ from Ephesians 3:7-8.
Preaching on What is the Church? and What does the Church do? from Acts 2:37-47, at the constituting service for Osogo TBC.
(2) At Osogo 6 believers promised to fulfil the Biblical duties of Christians, including the leader, Elisha Ouma.  It was well conducted by Daniel Ngollo of TBC Osani.

After lunch I asked Joseph Pila to tell me his testimony.  For 30 years he was in an African Independent Church called Roho Kerubi (cherubim?), in which he rose to the rank of senior archbishop.  In 2000 he was invited to a TBC convention at Thimlich where for the first time he was convicted of his sins and so began to understand the gospel of God’s grace in Christ.  This led him and 14 others to withdraw from the Roho church.  Although such a church would claim to have the Spirit in a special way (Roho = Spirit) they have nothing of the gospel.  Joseph reckons that few if any are genuine Christians and yet it is one of the most influential churches in the area.  Much is spoken about the phenomenal growth of the church in Africa, but how much is genuinely spiritual.  He told me he knew he was deceiving people and such an admission is made by many who come out of such groups.  He has a good relationship with his former church and is sometimes asked to preach.  I thought to myself that it would be good if he can evangelize full time as he is a very zealous brother, rather than sell his wares at the various market places in the area.  Although the latter can be a way of contacting people, and it is how Elisha was contacted and came out of the New Apostolic Church. 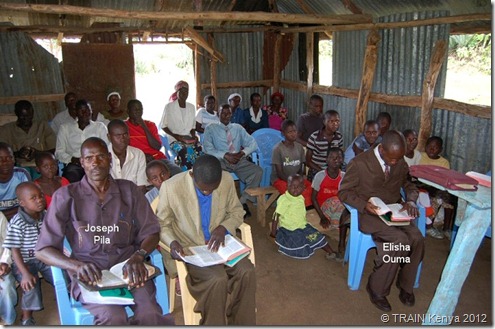 I asked why the church is still so small after 10 years.  There has been intense opposition with accusations of ‘devil worshipping’ and ‘cannibalism’!  With our serious approach to the word of God and worship we are such a contrast to almost everything else.  One of the men who had been in charge of the church had been unfaithful and it was almost taken over by another group as if we had left it in the lurch.  Elisha lives about 20 kms. away where he works using his sewing machine.  We hope to find a way for him to come near, and also get married!  Please PRAY for the unity and growth of this church.

Things Future
Marking PTC scripts.  Over the next weeks I have 3 courses that I must mark before the students return on January 11th. 2012.
V.B.S. from December 5th. to 9th.  We have been getting very few children of late.
Youth Retreat from December 9th. to 12th. which will be hosted in the house of a member who lives around the corner from the church premises.
School fees.  The new school year coincides with the calendar year, and many children, especially those of our church leaders will struggle to find the fees (£200/$300 annually).  2 boys whose fathers are pastors will be hoping to start secondary school in January and will need our help.  We shall be thankful if you can assist.
Labourers in the vineyard.  PRAY with us for someone
to help with the church in Miathene which is struggling from poor leadership
to go to Kasei and Chepkinagh in Pokot North to take up the opportunities with which our brethren are unable to cope
to go to Korr while Patrick Ochieng and family are away on leave for December
to accompany me to Malakal, South Sudan for the last 10 days of January 2012, in order to develop the ministry opportunities there.
“Pray earnestly to the Lord of the harvest to send out labourers into His harvest”.