Thank you for your prayers for Pastor Murungi and myself as we spent these 8 days away from Nairobi in the land of the Rendille people.  We asked you to pray for the good running of the car and safety in travel, and the Lord was merciful to us.  We also asked you to pray for good health and we were granted that throughout.
One of the purposes of going at this time was to assess the famine situation.  The area is certainly dry and almost all the livestock is very far away (50+ miles).  We talked at length with the local Chief and he told us he does not know of anyone who has died specifically as a result of hunger, but there has been a lot of sickness.  The Government, Churches and many NGOs have responded and there continues to be a need of such response.  The little rain that they can expect is not due until next month (November) and it is only then that they can begin to bring the animals home and have milk to live on.  We decided that we should help the communities where we have nursery schools (7).  Between 4 of them we bought 20 90 kg. sacks of maize and 4 of beans.  This translates to 3-5 kgs. of maize per family and one of beans.  We gave some special gifts of money to a few we know are specially needy.
We returned with a mixture of emotions.  There is the exhilaration of being able to preach to many people who are willing to listen and who know little or nothing of the Gospel of Christ.  There is the sadness of having to deal with problems between Christians that surely hinders the work humanly speaking.  There is the longing that the Lord would raise up more labourers for the many opportunities that are before us.  Then there is the thanksgiving to God that the work is going forward and not backward.
Let me seek to describe how the work is going forward in order that the Lord might be praised and to promote more fervent prayer.
Korr
Patrick Ochieng’ is the Pastor of this church with more than 30 members.  He has been there since last year and has seen more than 10 come to faith in Christ and be baptized.  The 3 women in the photo were baptized the Sunday we were there.  The only place we have to baptize at present is an animal watering trough that we must fill from the well where the water is at least 50 feet deep. 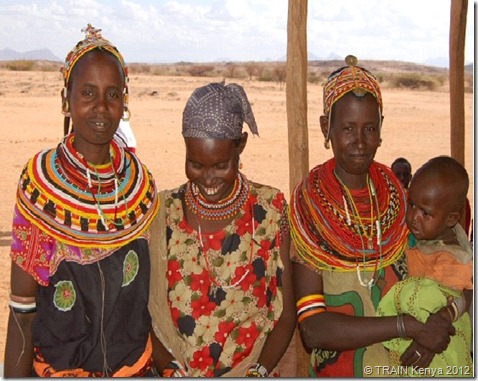 He is assisted by 3 Evangelists, Godana, Nadesol and Ogom.  On our first full day we spent most of the time seeking to iron out some working relationships that had become difficult and we are thankful to God that the conclusion was reconciliation.  We pray the result will be much more effective outreach to their unreached community.  Opportunities abound.  The people tenaciously cling to the animal sacrifices but it is the word of God that will break the chain that enslaves them. 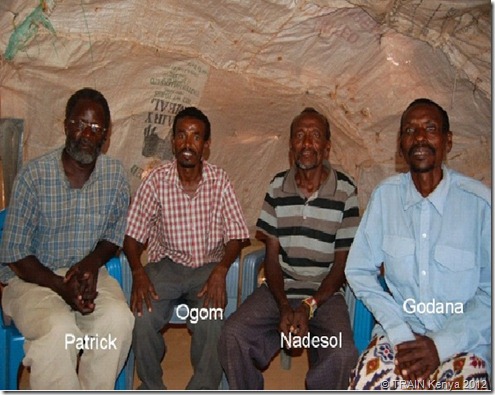 Sunday was encouraging with a good sized congregation, families, young people and visitors.  Incredibly they began before the official starting time of 9 a.m.  There is hearty singing and recitation of Bible verses they have committed to memory.  Then there is ‘Bible Study’ where Patrick has been going through Acts.  He made 7:51-53 very relevant to a people who have been following the tradition of their fathers.  After a short break there is the worship, and Murungi preached on 1 Corinthians 6:9-11 with Ogom translating from Kiswahili into Rendille.  There is no one who knows English well enough in our group in Korr so that I can be translated directly into Rendille. 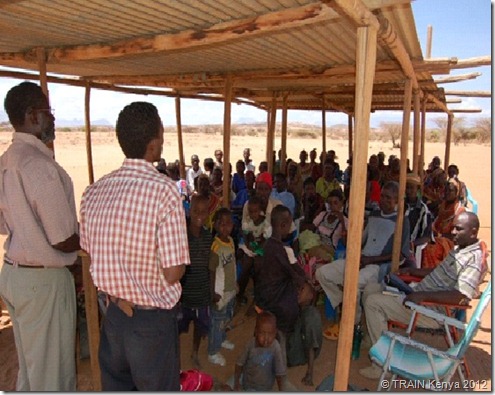 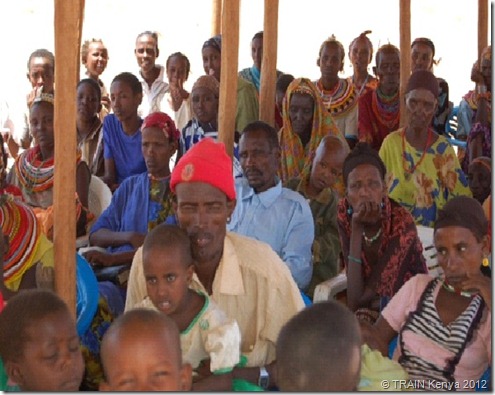 A secondary/high school has been started in Korr by the Africa Inland Church and 3 of our young people attend.  As all education is in English we are able to distribute much literature – our own magazine Grace & Truth, Free Grace Broadcaster and other Chapel Library material, and the classics as simplified by Grace Publications Trust.  The Lord is using these to instruct many and some are finding genuine faith in the Lord.
Lekuchula
We do not have an official trained leader here but one of our faithful nursery school teachers now also leads Sunday worship (Mario).  I have been going to this goob for 13 years and there have been 2 faithful women, Ntito and Nduruba.  Finally there is formal worship but still a very long way to go to establish a true Biblical church here.  We trust the first step has been made.
There is a nursery and primary school here with two classes.  It is so wonderful to be with the many children in this place, many of the boys running around naked.  On arrival as its getting dark all the children swarm around us.  We get them to sit down and sing and many just want to be around the chair where we are sitting.  What tremendous opportunities there are amongst the hosts of children.
Behind the towering hill called Bayo is another goob, a much smaller one, where Lethore lives.  He was baptized a number of years ago in Nairobi and is now married with a beautiful little child we had the privilege to hold and play with.  A nursery school has started in this remote place with a trained teacher Ambrose.  He is very open to the gospel so here is yet another place where we are able to preach.
Ndikir
Raphael Bulkash is seeking to church plant in this area where there are 4 large goobs with at least 150 families.  He is being supported by Kind Fund in starting an orphanage and school.  On Thursday morning the children sung to us and recited verses in English they had learned.  We then preached to about 10 women under a tree outside their goob.  The previous night we had all been disturbed by a rabid dog that the men had eventually killed.  Using Matt. 15:18-20 we told them there is a far worse disease than rabies, in the heart!  Later 2 women came to tell us how true they know that to be in their own experience.  May it cause them to seek Christ who alone can cleanse and make new the heart.
Lontolio
Stephen Leseitalo has recently started Sunday meetings here, about 10 km. south of Ndikir.  He is a student in our PTC.  He has done what is unthinkable to a typical Rendille, he has moved outside the goob and is living on his own with his family about 100 yards away.  Many have said that he will be cursed, but others support him because of his preaching.  He has done this because of the constant opposition as he does not observe the traditions.  So far about 20 women gather regularly.
As an educated man Stephen has been able to witness to primary school teachers, most of whom are Catholics.  Kenneth teaches at Lontolio Primary School and Stephen meets regularly with him to talk about the Scriptures and gives him literature.  It is through such literature that Stephen himself was saved from false religion and brought to Christ.  We took Kenneth with us to Isiolo as we travelled back to Nairobi and asked many questions about salvation and asked us to pray that the Lord might give him a new heart.  Another teacher at Ula Uli Primary School is a Protestant, professes salvation, and wants to be an encouragement to Stephen in evangelism.
Stephen has agreed to be walking the 10+ km. to Losidan, where we sponsor the primary school.  He will go each Friday to teach all the children (2 classes so far) the word of God and then preach to the community.  This is the privilege we have when we are able to sponsor a school.  But there are also responsibilities, such as provision of toilets that were ruined in a freak rain a long time ago.

Summary
Thank the Lord for the encouraging time we had, and the good fellowship enjoyed with Murungi throughout all the travels.
Pray for the men who are regularly ministering the word of God, the gospel of Christ, that they might be faithful, not only in their preaching, but especially in their Christian lives.
Pray for more labourers.  May the ministry among children in the schools and witness to teachers bear fruit.  Surely here are potential leaders.