South Sudan has been an independent country only since July 2011, less than one year.  Having suffered decades of war it is totally undeveloped.  From 20-30 January I have been with the brethren of the Dinka community, the largest in the South, in the Upper Nile State which is centred in Malakal.  In 1992 the specific area where many of these brethren come from east of Malakal along the Sobat River was caught up in the war, devastated, and the people fled north for refuge to the cities from Renk up to Khartoum.

The brethren now in the congregations of the Trinity Baptist Church of Sudan were up in this.  Many of them went to Kenana, but since 2005 and the peace deal they have been returning to what is now South Sudan.  They have found a country totally impoverished, still dependent on Khartoum (Sudan) for almost everything.  Even the oil, the one resource they have with which to develop the country, is taken by pipeline through Sudan to Port Sudan.

Trinity Baptist Church has come out of Presbyterianism.  Their knowledge is little, few have much education (the result of war), and their leaders no formal training.  The one exception is the founder and moderator, David Awan Malek.  He studied accountancy in Egypt, is fully literate in Arabic, and is now undergoing a Bible School training in Melut with the Sudan Interior Church.  Language is a further complication for the church.  Under the dominance of the Arab north, the African South used Arabic, but it is more oral than literary.  Now the country has decided to turn away from Arabic and increasingly use English.  As yet there are few good English speakers.

The brethren have opened their heart to me concerning this need for training.  “Many Christians from the West are coming to help Churches as they begin rebuilding from rock bottom, and especially in the area of training leaders.  We are losing leaders each year to those other Churches that can provide such training.  Please present our request to your friends so that they can come and help us.”  I have clearly told them that at my age I cannot do it myself. 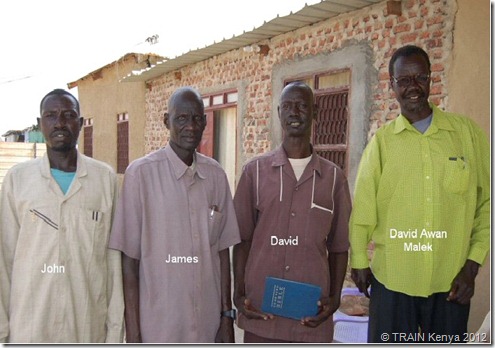 As you might expect there are other financial requests in the background, but this is undoubtedly the urgent need.  They only have the New Testament in the Dinka language, but at least they have it.  So I have responded by telling them I will continue to present their request, but that their very greatest need is to read and know the Bible they have and then to preach it in the power of the Spirit; training by itself guarantees nothing.  I believe they are brethren sincerely open to the word of God and thus can be moulded into the form of Biblical truth.  Friday was the highpoint of the time when I was able to sit for hours with 5 of the leaders letting them ask me question after question from their Bible reading.  Often they laughed at how clearly the Bible gives answers to all sorts of questions that had previously baffled them.

This new country is wide open to the gospel.  Now is a day of opportunity.  It is easily possible to live and minister here.  In Malakal I met a couple almost my age, of Indian extraction, but from the States, who have been teaching in a Bible School for the last 2 years.  There can be periodic visits for seminars.  In Balliet 7 American Baptists come each year to help in establishing the Bible School there.  Just as Barnabas in Antioch sought the help of Saul, so they are seeking our help.  The Church is seeking to expand its ministry to the most important city of Juba.  This is a country where most people claim to be Christians but where the Great Commission is far from completed.  We visited a Government official in Renk who asked me what we are doing as a church to heal the community divisions in the country which are seriously breaking out.  I was able to clearly tell him that it is the gospel of Jesus Christ which alone can truly unite people, and that is what we are preaching.

Please pray for this country, and for these brethren I visited.
Also pray for the next 10 days where I shall be in Rendille with son Jonathan.