It is time to update you after a very busy few weeks, during which we have been upheld so that it has been a very profitable time.

Gary is Pastor of Child’s Hill Baptist Church, London. He was with us from 15th. to 22nd. April and we so much appreciated his ministry and fellowship.

This is one evangelistic effort we make when we provide a special meal (at a price!) in the church hall, followed by half an hour’s preaching. Gary spoke on Matthew 11:28-30 to the 70+ who came. The church members did a wonderful job of inviting their contacts so that there were many visitors. I talked with one young working lady who lives just around the corner so has often walked past the premises. It is not difficult to ask the question ‘Are you saved?’ at some point in the talking and this usually leads to something very profitable. May the Lord bring much fruit.

We had a wonderful Conference on the theme of Regeneration, with more than 50 men present at some time. Different brethren led the morning devotions. There were 2 valuable ‘workshops’ on the subject of Associations of Local Churches. I also gave a paper on the 1689 Baptist Confession. There was an interesting discussion on how to make the Conference more valuable to more men. We concluded with a prayer meeting. We certainly came away knowing the importance of the doctrine of Regeneration, both in our experience and in our preaching. May it be as effective as when Whitefield preached! 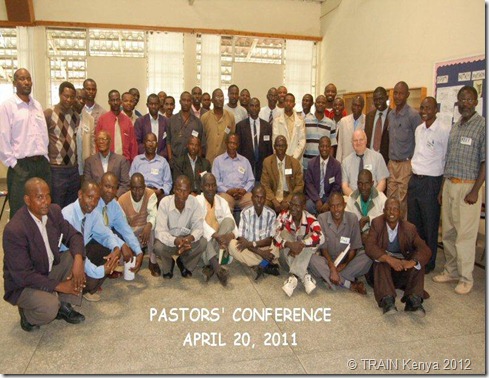 ‘Pwani’ means Coast and this is the part of the country I travelled in immediately after the Pastors’ Conference, together with Chris Gatihi.

(1) Vote is a small church led by Benson Nyamai half way towards the Coast, near Mutomo. We arrived in time at have a Good Friday service in the early afternoon. Afterwards we moved around the centre witnessing to various people. You will see from the photo that their brick building was destroyed by a strong wind, so now they have put up a temporary shade. 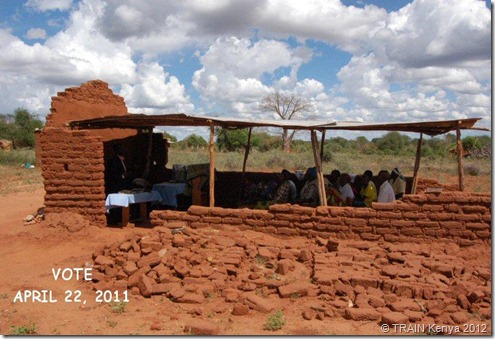 (2) Boyani is near Mombasa, just a few kms from where the first missionary in Kenya, Krapf, settled (Rabai). The area is made up of Christians, Muslims and traditional people (magic is greatly feared). The church is mainly young people and we had lengthy discussions with them about marriage. The main problem has to do with the payment of the dowry. In-laws demand that it be paid in full before the marriage ceremony, something which is impossible for most unless endless years pass by. What should they do? They must not start living together as one couple have done out of frustration. When they are of age they are allowed to marry even without parental consent, whether in the church or before the appropriate government official. They can tell the bride’s father of their respect and willingness to pay dowry over time. Interestingly the couple now living together have not been harassed because of non-payment. It was Easter Sunday and I preached from Luke 24:36-43 about the witnesses to the resurrection. 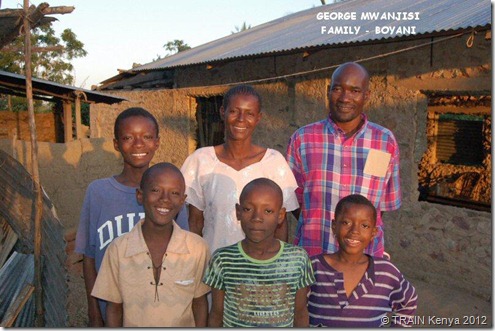 (3) Idsowe is more than 200 kms north of Mombasa, near where Kenya’s largest river, the Tana empties into the Indian Ocean. This where Titus Tumaini lives and ministers, seeking to reach the Malakote people first of all. There is a small fellowship that has been established but so far he has seen no converts amongst the unreached around him. There are people nearby from 4 unreached peoples – Malakote, Orma, Sanye, and Wardei. They all follow Islam and are difficult to penetrate. 10 years back there were estimated to be 45,000 Malakote with <0.01% evangelical Christian, 60,000 Orma with <0.01%, 10,000 Sanye (or Watta as they prefer to be called) with <0.07%, and 35,000 Wardei with <0.01%. You will appreciate that 0.01% of 60,000 is 6 only and there are less, i.e. almost no one. I met with Iddi Nahum for the first time, a Christian Sanye who is considering working with Titus. This would be a great encouragement to Titus. I believe we must have a special concern for such unreached. 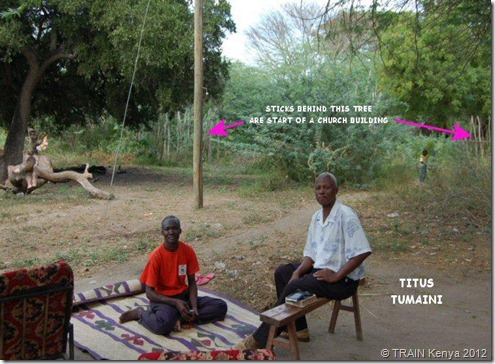 (4) Kima is much nearer Nairobi, on the main road from Mombasa about 100 km. before reaching Nairobi. On April 16th. a few of us visited to interview those who wanted to be the founding members of the church. 9 were recommended with 6 to be baptized as believers. We called in on the way back and in true Kenyan style were treated to a lovely meal. The picture shows us under the building they have begun to erect, and of course we are again eating. 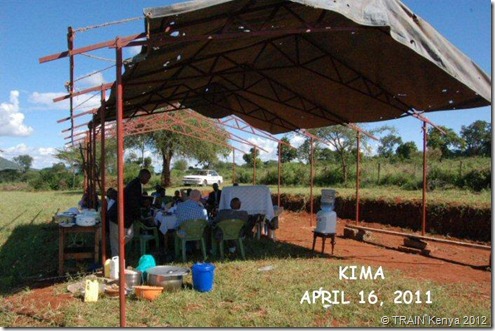 We thank the Lord that the Reformed Baptist Association of Kenya has finally produced its report to be officially sent out to all concerned, relating to the problems of division starting in 2008. They have given their full backing to me and have blamed others for not responding to their invitation for discussions in order to pursue reconciliation. Please pray that no effort will be spared in seeking such reconciliation, for the glory of God and the spread of the gospel.

Please pray for the following in the next week:

We are seeing unusual blessing at this time, and we earnestly pray against the devil sowing seeds of discontent and division. We ask for your prayers.