Our son Matthew has been with us for most of May and I am writing this while we are on a few days’ break away from Nairobi.  We are staying in a house in the Rift Valley from where we can see Lake Naivasha and the Aberdare Mtns. as a backdrop. 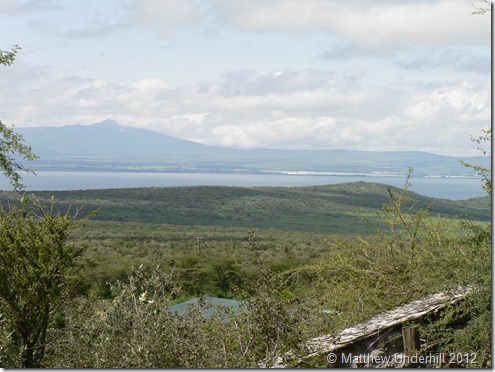 Today we went to Crater Lake a private game sanctuary centred in the Lake that nestles at the bottom of a crater (obviously).  It is the only time we have been away with Matthew.  Earlier I had attempted to take him for a night of camping at the Amboseli Park on the border with Tanzania, but that day the car totally broke down twice so we had to abort the trip.

The last month has been full of various kinds of ministry:
Sunday preaching & Adult SS.  I have continued to preach on Ephesians 4 most mornings, and Judges in the ‘evening’ (4 p.m.) service.  We have divided the Adult Sunday School into 2 – Pastor Murungi is going through a 10 part series on ‘Our Distinctive Doctrines’ (see website) and I am seeking to explain the prophecy of Joel to seek to show that such books of the Bible are not so difficult!  We are thankful to the Lord that more people are coming to the services so that most Sundays we have visitors who we invite to talk over a cup of tea in a room we have set aside.
Meaty Forum.  The aim of this Forum is to bring serious Christianity, i.e. the Reformed Faith, to the younger generation through a panel-type discussion.  This was the 2nd. one with up to 50 present (less than the first).  The presentations on how to interpret the Bible were well received.  Afterwards I asked 2 young people what they found so useful.  They did not know that there can be principles for interpretation, like grammatical structure and historical context.  I suppose they have been reading and just hoping something will jump at them out of the text, a sort of existentialism.  No wonder there are so many varied teachings.
PTC (Pastoral Theological Course).  From 16th. to 23rd. I had the privilege of teaching the 7 students again, on Early Church History, and the first half of Gospels & Acts.  They are so enthusiastic about studies and they are all completing the work in the allotted time.  Judging by their written work and the comments they make these studies are having a profound impact on their lives and ministries.  I would like to introduce a degree-type course so that in the future we will have those who can teach in this Course when I am no longer here to do so.
Marriage Counselling.  Our young people are seeking to act with much discretion as regards relationships.  3 of the young men have sought to engage us as elders even before they start a formal relationship.  They say they want to be accountable.  You will remember that Alan & Kesiah were married in February and immediately went to settle in Hong Kong where Alan is working.  They have come for 2-3 weeks holiday and it is so refreshing to fellowship with them again and to talk about their marriage working out in a totally new environment.  Another couple are getting married, Lord willing, on September 1st. and have asked me to counsel and marry them.  Manases is leader of a small work the other side of Nairobi which has been profoundly influenced by Desiring God Ministries and which wants to be in fellowship with Trinity Baptist Church.
Biblical answers to common questions.  In the coming months I am planning to give some attention to writing a series of leaflets dealing with commonly asked questions that especially have to do with the aberrations centred in the charismatic movement that are so common in Kenya.  Pastor Murungi has been developing a Vision for Nairobi in which we are encouraging Bible studies in various parts of the City with the prayer that some will turn into church plants in years to come.  Nairobi is a large city of around 4 million and there are hardly any Reformed and Baptist Churches.  Generally there is an almost total dearth of serious Biblical preaching.  We are told that many are so fed up with the things that go on in so-called ‘worship’ that they despair of finding anything different.  Hence the Meaty Forum, the republication of our quarterly magazine Grace & Truth, and the development of our website.

Once again we thank the Lord for our continued fellowship in the Gospel as you pray for the success of the Word of God amongst us.